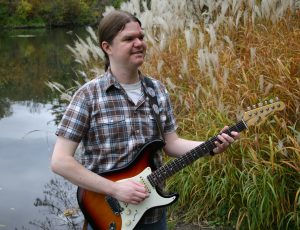 To me, the most important aspect of playing, learning, teaching, performing, or listening to music is enjoyment.  Music should not feel like “work” or “a chore”.  That’s the attitude I bring to my lessons and classes.  I want students to look forward to their weekly lesson, and be motivated to practice for the purpose of enjoyment rather than obligation.

Learning an instrument is a challenge, but I’ve spent my 20+ years as a guitar instructor developing a system to keep the challenge fun and interesting, while learning all of the fundamental techniques of guitar, and knowledge of music.

Zeb Cruikshank has been performing professionally since 1994, in a wide variety of musical environments.  In the early years of his career, his primary influences were blues and classic rock.  With the direction of his private instructors over the years, as well as musicians he has played with, he began to develop an interest in other musical genres such as funk, jazz, and fusion.

As a teenager, he had a successful 4-year run with a funk/blues band called Brick House.  During these 4 years, Brick House recorded 2 albums of original music, developed a large following in the New England area, and opened for numerous national acts.  Shortly after Brick House disbanded, Zeb decided to move to MN to attend McNally Smith College of Music and pursue a bachelor’s degree in Guitar Performance.

As a student at McNally Smith, Zeb not only learned more about the styles of music he had already been playing but was also exposed to classical and acoustic fingerstyle guitar, which became yet another subject of focus.  His interest in acoustic guitar styles led to the formation of acoustic duo Jess & Zeb, who performed around MN for almost 15 years, and recorded an album of all-original compositions.

During his 18 years in MN, Zeb also recorded an album of all-original jazz pieces, and performed countless solo, duo, and full band shows in many different venues and genres.  He taught at multiple music stores and academies and spent his final 5 years in MN on the guitar faculty at MacPhail Center for Music, one of the nation’s oldest and largest community-based music education non-profits, teaching group classes and individual lessons to students of all ages and levels.

He returned to his home state of NH in the Fall of 2019, where he immediately resumed teaching lessons, and doing live jazz, blues, and acoustic performances.