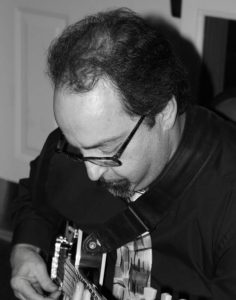 Teaching Statement: I’ve always believed in lessons being more interactive.  When the student learns to play duets with the teacher, they become more confident and this helps keep the student enthused and more engaged.

Teaching/Performance Bio: Mr. Zannini has played throughout New England with a number of bands in such venues as Hynes Auditorium, Mechanics Hall-Worcester MA, Museum Of Science-Boston, World Trade Center and WGBH Studios Brookline, MA to mention just a few. He also appeared with Dave Rasmussen Jazz Band at the Pressroom, Portsmouth, NH. He also composed the music for and co-produced for the band Brotherz a Jazz Fusion project.

Zannini has been teaching extensively in the Greater Boston and New Hampshire areas. He loves to share his stories as a young guitarist in the Boston area where he would frequent the Jazz Clubs and Classical Halls to see and sometimes get to meet legendary musicians such as guitarist Andres Segovia and Jazz guitarist George Benson. His vast experience in teaching jazz, classic rock, blues, classical, funk and pop along with his playing, recording and original composition experience, helps him bring an eclectic scope to the learning process.