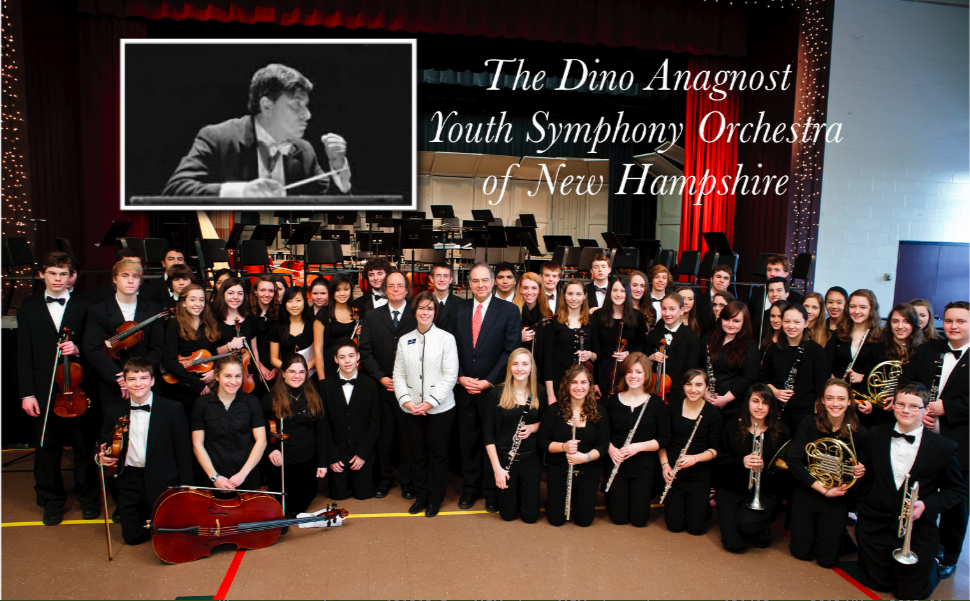 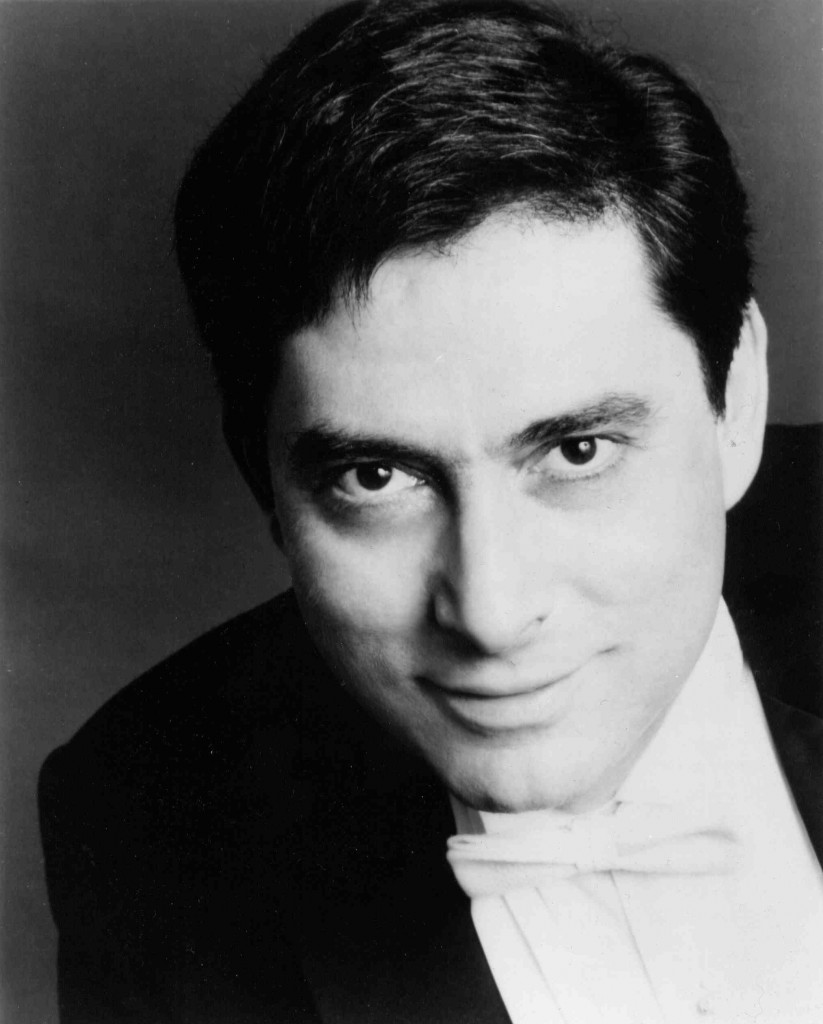 Thanks to the generosity of local businessman Dick Anagnost, President of the Anagnost Companies, the Music School’s 27-year old NH Youth Symphony Orchestra will be re-named in honor of his late brother. The Dino Anagnost Youth Symphony Orchestra of New Hampshire will be dedicated on January 20, 2013 at 3 pm the school with a celebration concert, featuring a program comprised of the late maestro and music advocate’s favorite composers and works. This concert is part of the Music School’s annual Winter New Hampshire Youth Ensembles Concert, featuring all of the school’s ensembles, including the NH Youth Jazz Ensemble.

“The entire Music School Family is honored and thrilled that our orchestra will bear the name of a musician of such high caliber, someone who dedicated his entire life to music and music education, and a Manchester native,” said Music School CEO Jeanine Tousignant. “Dick Anagnost’s extraordinary gift to the school to honor his brother’s legacy will provide for music education for countless of our community’s children now and well into in the future.”

Dino Anagnost was Music Director and Conductor of The Little Orchestra Society of New York for 33 years, a mid-size classical ensemble offering a broad repertoire of interactive music experience that captivated audiences of all ages.

His Orchestra presented a distinct sound and personality that is unique to orchestras that have played together under the same leadership for many years.  Maestro Anagnost’s innovative programs transformed audiences’ appreciation for music by incorporating multi-dimensional theatrical elements that brought the music to life.  Each of the series for children and adults featured celebrities from complementary arts—luminaries from stage and screen: dancers, circus clowns, illusionists, puppets, and even baton twirlers.  Under Anagnost’s tenure, The Little Orchestra was best known for its original children’s concerts, Lolli-Pops, where he assumed the beloved persona Mister Maestro, and Happy Concerts for Young People and adult concert series Vivaldi’s Venice, Sound Discoveries®, and Cathedral Concerts—Great Music Under a Byzantine Dome®, as well as its family holiday production of Amahl and the Night Visitors in long-time collaboration with composer Gian Carlo Menotti.

Committed to the music education of children, he introduced more than one million children to the joys of classical music.  “Basically, our philosophy is that you are never too young or too old to really enjoy classical music,” Anagnost commented.  “We share our excitement about the music with the children and feel that we have now created a new generation of concert-goers.  I think a child comes unprejudiced to a concert and it’s up to us to show them the way and involve them.”  Karen Huynh in New York Family declared, “The organization’s shows for children are so special one wishes they could be a part of every childhood.”

Maestro Anagnost was born August 16, 1943, in Manchester, New Hampshire, the elder son of Stella and Zissis Anagnost.  He continued his education at Boston University, The Juilliard School, Harvard University, Tanglewood, and New England Conservatory, where he pursued advanced Music Studies, Teachers College and Columbia University where he earned his Doctorate in Music.  Dr. Anagnost held the position of Adjunct Professor of Music at the University, 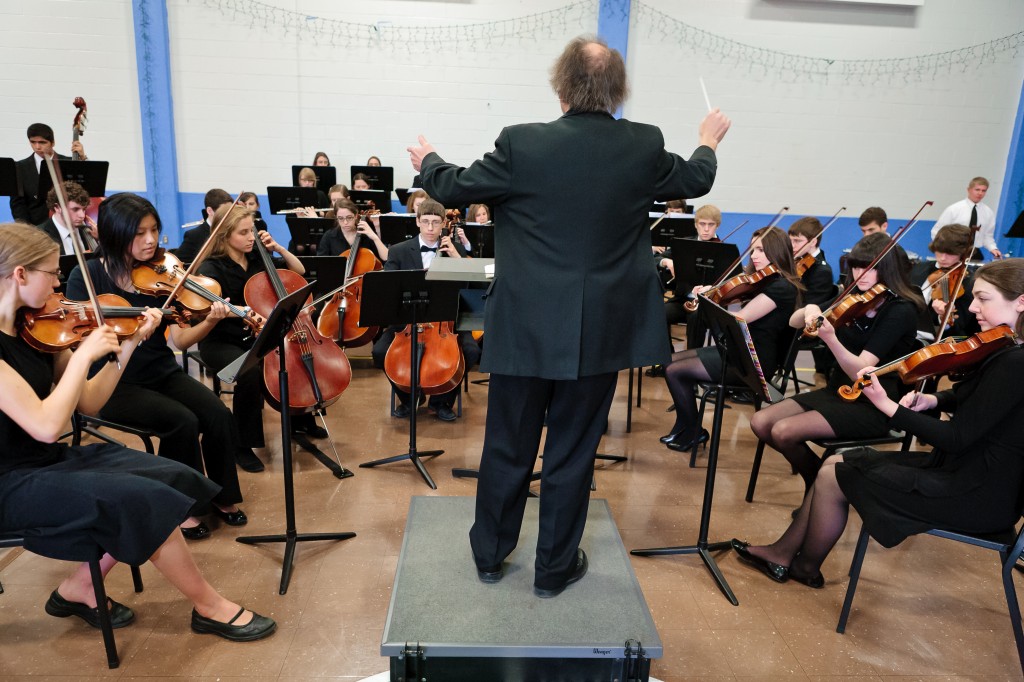 The orchestra performing at the 2012 Spring Concert. Photo by Matthew P. Lomanno

Maestro Anagnost conducted concerts and opera throughout the world, from Washington, D.C.’s Capitol Rotunda and the White House, to Greece and South Korea.  A champion of contemporary music, he conducted world, American, and New York premieres of compositions by major 20th– and 21st-century composers in his concert series at Lincoln Center, Sound Discoveries®  This series supported the work of New York native or New York based composers such as Samuel Barber, Leonard Bernstein, Elliott Carter, Cy Coleman, Aaron Copland, John Corigliano, George Gershwin, Bernard Herrmann, Victor Herbert, Ned Rorem, Virgil Thomson, and over 50 others from Steven Sondheim to Otto Leuning. On a number of occasions, Maestro Anagnost provided music for Rockefeller Center Christmas Tree Lightings as well as free outdoor concerts at Lincoln Center’s Damrosch Park and the Winter Garden Pavilion at the World Financial Center.  The Little Orchestra Society participated in several public service programs created by Anagnost—Musical Connections:  The School Partnership Program, Live in Concert!, and Project 65Plus.  New York Mayors Bloomberg, Giuliani, and Koch all presented Anagnost with proclamations citing his contributions to the City’s culture.

Maestro Dino Anagnost is respected worldwide for his innovative music series.  In 1990, he conceived a musical festival series based on the musical genius of Italian composer, Antonio Vivaldi.  Vivaldi’s Venice thrived for twenty years and presented the composer’s works in the dazzling style of the eighteenth century, along with Anagnost’s informative and entertaining commentary on the music and its milieu, another much copied innovation.  Through numerous performances of New York and American premieres, Vivaldi’s Venice has played a significant role in the worldwide renaissance of the composer’s works.  In addition to works by Vivaldi, Anagnost led the Orchestra in other works by household Italian names like Verdi, Rossini, Puccini, and Scarlatti, as well as works from composers the ilk of Ildebrando Pizzetti, Agostino Steffani, and Amilcare Ponchielli.  For his service to Italian music in the United States, Maestro Anagnost was conferred the honor of Commendatore in the Order of Merit of the Italian Republic.

As Dean of Music at the National Greek Orthodox Archdiocesan Cathedral of the Holy Trinity in New York City, he received medals from Patriarchs of Constantinople, Alexandria, Russia and Romania.  For his contributions to Greek music and the Church, he was knighted as an Archon of the Ecumenical Patriarchate of the Order of St. Andrew and conferred Archon of the Holy and Great Church of Constantinople.  Cathedral Concerts—Great Music Under a Byzantine Dome®, showcased the conductor’s own compositions and arrangements along with other classics of the repertoire.

The January concert is open to the public and admission is free with a suggested donation of $5 per person or $10 per person. The entire concert begins at 1 pm, and the symphony orchestra portion of the event begins at 3 pm.

For more information about the re-naming of the orchestra, contact Jeanine Tousignant, CEO at the school.