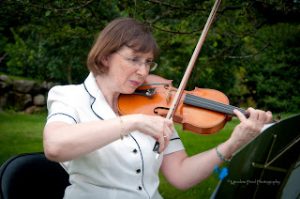 Muriel was born in Bordeaux, France. She attended the Bordeaux Conservatoire de Musique and the Paris Ecole de Musique receiving a 1st Prize in Violin in both schools. She came to America to study under Raphael Hyllier from Julliard and received a Bachelor of Music degree from American University in Washington, D.C. She taught violin at Pau Conservatory in France for four years before returning to America. She then obtained a Master’s degree in Music Education from the University of NH. She has played with the Bordeaux Symphony Orchestra, the Pau Chamber orchestra in France and the NH Philharmonic Orchestra. She was a soloist for the Pau Chamber Orchestra in France and the Nashua Chamber Orchestra. Muriel has been very active in developing strings in NH. She was president of the NH Chapter of The American String Teacher association  from 1999 to 2001. She was named  NHASTA String Teacher of the year  in 2000 and 2005. Her Goffstown students recently performed for John Lynch, the present governor of NH. She is principal second violin of the Lakes Region Symphony Orchestra and plays with the NH Fiddle Ensemble under the direction of Ellen Carlson. Muriel enjoys speaking French with her son Pierre and her bilingual cat Minou!