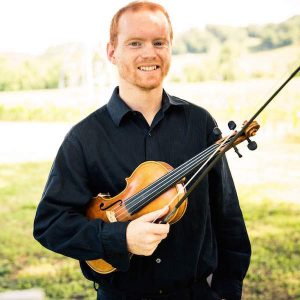 Bachelor’s degree from Butler University in Indianapolis and a Master of Music in Violin from the College-Conservatory of Music (CCM) in Cincinnati.

Matthew Dickey has held positions with the Butler Philharmonic as principle second violin and with the Danville Symphony as Assistant Concertmaster. He has also been a member of Sinfonia da Camera and the Springfield Symphony, and has made several appearances with the Dayton Philharmonic and the Indianapolis Chamber Orchestra.

Matthew also has extensive experience both locally and on tour with musical productions. He was the Concertmaster of the Booth Tarkington Civic Theater from 2012-2013 and was the Assistant Concertmaster of the Gilbert and Sullivan Players of New York for their 2015 Tour of the Midwest. Matt also served as Concertmaster in the CCM productions of Legally Blonde and Peter Pan in 2014 and 2015.

Matthew started his teaching career while still in his undergraduate degree program at Butler University. There he worked for the Butler Community Arts School with private students as well as summer workshops. Upon moving to Cincinnati in 2013, he maintained a studio of 30 students between the Toedtman School of Music and the Northern Kentucky School of Music. He currently teaches at the Manchester Community Music School and the Concord Community Music School.