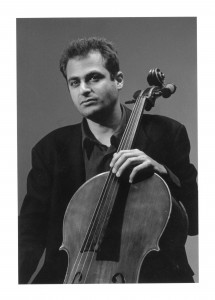 Mr. Gietheim is a native of Kibbutz Ruhama, Israel, and began his cello studies at the age of ten. He participated in many master classes with renowned cellists such as Yo-Yo Ma, Lynn Harrell, Janos Starker, and Aldo Parisot. In 1988, he won a major prize in a cello competition, which provided him with a full scholarship to the Aspen Music Festival in Aspen, Colorado.  In 1995, Mr. Gietheim came to the United States to study at Longy School of Music, where he completed his Master’s degree.

Mr. Gietheim’s diverse performing experience includes: performing in Boston’s premiere contemporary classical music series “The Red Sneakers”, touring for a year as cellist for the National Broadway Tour of “Jekyll and Hyde”, and his current position as principal cellist with Symphony New Hampshire.  A long-standing faculty member of the Manchester Community Music School, he also teaches at St. Paul’s School.  His students have consistently achieved high marks and have won concerto competitions including: the Dino Anagnost Youth Symphony Orchestra of NH, NH Philharmonic, and Lakes Region Symphony Orchestra. They have also won admission to prestigious schools and degree programs including the Peabody Conservatory, Boston University Tanglewood Institute, Aspen Summer Festival and the Apple Hill Center for Chamber Music. Described as a “brilliant cellist” by the Boston Globe, and praised by New Hampshire’s Hippo Press for his “top notch”solo playing, Harel Gietheim has impressed audiences and critics alike with his fresh interpretations and dramatic presentation style.