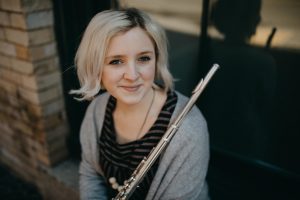 With students of any age, I focus on creating a strong understanding of the fundamentals for their playing using both traditional methods (exercises from the great pedagogues such as Moyse, Taffanel, and Gaubert) as well as new techniques from contemporary musicians. My main goal is that through a strong foundation and a learned ability to ask the right questions, students are able to transform into well-rounded musicians with the ability to face challenges, both musical and non-musical, head on.

Erin holds an M.M. in Flute Performance from the University of Massachusetts at Amherst studying under Christopher Krueger and a B.M. in Flute Performance from the University of Southern Maine studying under Jean Rosenblum. Additionally, she has attended masterclasses at Le Domaine Forget, the Julius Baker Masterclass and the ARIA International Summer Music Academy performing in masterclasses with Alexa Still, Marya Martin, Susan Hoeppner, Mathieu Dufour, Conor Nelson, and Robert Dick. Erin studied piano with Victoria Bartlett for two years before continuing on to study with Phil Burns at the University of Southern Maine.

Erin Dubois (flute, piano) is an educator and freelance flutist based in the NH Seacoast. For over a decade Erin has worked with students from various backgrounds and abilities to develop their skills and  musicianship.  She believes that all students should have access to high quality education with a teacher who believes they can achieve anything they set their minds to. Her students have gone on to win competitions and be accepted into music programs at UNH, UConn, and the University of Maryland. Alongside MCMS, Erin teaches at PMAC (flute, piano, early childhood education), CCMS (flute, early childhood education), and maintains a private studio. She is also the instructor for the flute section of the Woodwind Methods class at UNH and she has taught masterclasses and flute choirs throughout New England.

Erin plays second/third flute with the New Hampshire Philharmonic and is an alternate with the Portsmouth Symphony Orchestra. Other performances and projects include Strange Trace, The Tim Janis Ensemble, the Refugee Orchestra Project, the Nashua Chamber Orchestra, flute choirs, recording projects, and solo performances. With a special interest in New Music, she has premiered dozens of new works and has participated in commissions for pieces for Flute and Piano and Flute Choir.