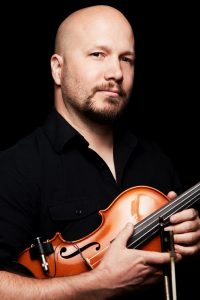 “You are rarely too young, and never too old to begin your musical journey.”Corey Walden has been teaching the violin to individuals of all ages and levels from beginner to advanced for over 22 years using the Suzuki Method. He caters his lessons to the individual needs of each student to help them grow as musicians while keeping the learning process fun and engaging.

Originally from Oakville, ON, Canada, Corey Walden started violin lessons at the age of five and distinguished himself with rapid advancement through the Suzuki Violin Method. As a student, he performed with multiple youth orchestras and was a guest violinist with the Toronto Symphony Orchestra. Corey studied Applied Music at Mohawk College (ON, Canada) as well as receiving his Suzuki teaching certification from Queens University (Kingston, ON, Canada), after which he began his career teaching private classical violin lessons in the Greater Toronto Area. During this time, he also performed with various string quartets and chamber orchestras, and soon started to explore different styles of performance including fiddle, rock, and electric violin.

Corey first started touring the various Celtic and Scottish Festivals of North America with Celtic rock group Hunting McLeod in which he was a co-founder. He was also invited to perform and tour with other notable Celtic bands as a guest fiddler including Coyote Run and Rathkeltair. Corey has also toured the US and Canada extensively as well as performed internationally with The American Rogues in such places as: Japan, Bermuda, Italy, Spain, Guantanamo Bay, Las Vegas, and Constitution Hall in Washington D.C. along with the U.S. Air Force Orchestra. More recently, he toured with the new hit production Rockin’ Road to Dublin, directed by Broadway director and choreographer Jeff Whiting which includes top artists from Lord of the Dance and Riverdance.

Corey is an experienced session musician and has contributed to the work of multiple recording artists including Boston based Irish group Boxty, as well as Eddie Mottau (guitarist for John Lennon and Yoko Ono).

Corey immigrated to the US and has been teaching private violin lessons and group classes in southern New Hampshire since 2013 alongside his performance career. He is very excited to be a part of the Manchester Community Music School.