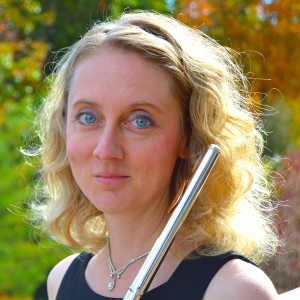 I teach all ages and levels of students dedicated to investing the time and effort needed to grow and reach new levels of playing the flute! I use visual imagery along with the traditional methods of the great flute teachers such as Marcel Moyse, Paul Taffanel, and Philip Gaubert to achieve high levels of performance along with artistic and technical mastery in my students.

Ms. Dionne received her B.M. in music performance from the University of New Hampshire and has studied at the graduate level at the Longy School of Music. Her teachers include Robert Willoughby and Peggy Vagts.

Ms. Dionne is an active performer, teacher, conductor, and adjudicator in New England. She is principal flutist of the New Hampshire Philharmonic Orchestra and the Portsmouth Symphony. She has also performed with the Great Waters Music Festival, Granite State Opera, the Handel Society of Dartmouth, Longy Chamber Orchestra, Brockton Symphony, Manchester Chamber Players, Hanover Chamber Orchestra, Granite State Symphony Orchestra, and the Manchester Choral Society. She has performed as a soloist with the New Hampshire Philharmonic, New Hampshire Symphony, the University of New Hampshire Symphony and Wind Symphony, the Strafford Wind Symphony, and the Lakes Region Symphony.

Ms. Dionne has also won several performance awards including first place in the Music Teachers National Association Collegiate Artist Performance Competition for four consecutive years in 1996-1999. She has also won the University of New Hampshire Concerto Competition twice in 1999-2000. In addition to teaching at MCMS, Ms. Dionne is on the faculty of Plymouth State University and Southern New Hampshire University. She also teaches flute masterclasses every summer at the Summer Youth Music School at the University of New Hampshire. Her prize-winning students have won the Emerson Scholarship, the Granite State Auditions, and participated in The New Hampshire All State Music Festival. They have played in the Boston Youth Symphony Orchestras, the Dino Anagnost Youth Symphony Orchestra, the North East Youth Symphony Orchestra, Interlochen Arts Camp, and the Tanglewood Summer Music Festival. Ms. Dionne currently conducts a collegiate flute choir at Plymouth State University and a flute choir at the Manchester Community Music School. In 2003 and 2016 she was the guest conductor/clinician at the New Hampshire All State Chamber Music Festival where she worked with their flute choir. She has also adjudicated the New Hampshire Music Educators All State Auditions, the NHMEA Solo and Ensemble Festival, and the Greater Boston Flute Association Solo and Ensemble Festival.

She received her B.M. in music performance from the University of New Hampshire and has studied at the graduate level at the Longy School of Music. Her Teachers include Robert Willoughby and Peggy Vagts.