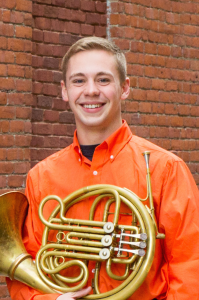 Education: Andrew Bass received his Master’s degree from The New England Conservatory where he also received his Bachelor’s Degree in Horn Performance studying under Jason Snider and James Sommerville the principal and 4th horn of the Boston Symphony.

Teaching/Performance Bio: Andrew Bass is an emerging, classically trained performer who resides and freelances in Boston. He has performed in places such as Carnegie Hall in New York, Symphony and Jordan Hall in Boston, The Symphony Center in Chicago, and Cincinnati’s Music Hall. He had his solo premiere with the Blue Ash Symphony Orchestra as well has won multiple scholarships for his versatile playing.  Andrew was a finalist in the International Premiere horn soloist competition.  Andrew plays with many groups in the New England area such as the Atlantic Symphony, Phoenix Ensemble, and Eastern Connecticut Symphony. He participated in the Aspen Music Festival and National Orchestral Institute and Festival He has also played in a variety of chamber ensembles. His group the Amici quintet was deemed the honors ensemble at New England Conservatory.