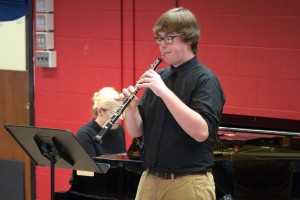 For winning the competition, Camden will perform his concerto as a soloist with the Dino Anagnost Youth Symphony Orchestra at MCMS and at Keefe Auditorium in Nashua in a Symphony NH family concert in February 2014.

Camden Ward is a sophomore attending Exeter High School who has been playing oboe for three and a half years. He previously played oboe with the Seacoast Wind Ensemble. A multi-talented musician, Camden also plays bassoon, flute, clarinet, saxophone, violin, and piano. Camden was asked to play this year the All New England Band Festival at Plymouth State. Last year, Cam auditioned for the All-State Music Festival and was invited to play in the Chamber Festival in the chamber winds (a double wind quintet) and placed 2nd oboe in the All-State orchestra. This past summer he also spent two weeks at the Summer Youth Music School at UNH (SYMS), where he placed principal oboe in the top band, orchestra, and wind quintet. Camden is currently playing first oboe in the Dino Anagnost Youth Symphony Orchestra and the Music School’s new Wind Ensemble. Camden also loves to ski and golf and is also on the Exeter High School ski team.